Create a Retail Destination, Not Just a Store

In 1936, after 5 years of hardly any business to speak of, a drug store owner in Wall, SD got an idea. (I guess it was his wife’s idea.) He went out to I-90, the major highway that went by Wall, and put up a billboard offering free ice water at their drug store in town.

The rest is history. If you’ve never driven by Wall, SD, you won’t know what I mean. But Wall Drug is about the most famous thing in South Dakota (besides Mt. Rushmore) and has been one of the Top 10 roadside attractions in the US since. The famous billboards start hundreds of miles out so when you finally do get to Wall, you feel almost guilty for not taking the exit and stopping in to see what all the hubbub is about.

Wall Drug is essentially one big tourist trap. And I mean BIG tourist trap. It’s a sprawling 50,000 square foot testament to everything cheesy about America. But it’s something I will NEVER drive by without stopping at, it’s just that fascinating. (If I lived there, I would, of course. But if I’m driving by once every 10 years, I’m stopping in.)

In the beginning, they became known for something. They were known for free ice water, in the middle of the depression. Sure, that’s something ANY store could have become known for, but they actually did it.

Then they capitalized on that and made sure EVERYONE within hundreds of miles knew about it through their roadsigns. Their annual roadsign budget is $300,000. They also have managed to get signs in other countries, even. You’ll see Wall Drug signs from Antarctica to London. They’re known for displaying how many miles it is to Wall Drug. You’ll get that inside joke when you start travelling down I-90 in South Dakota. You start seeing signs that say, “Wall Drug – 500 miles” and you’ll see them CONSTANTLY so when you finally start approaching the town of Wall, you’re so freaking curious you just have to stop.

The owner, Teddy, says they’re selling an experience. Plain and simple. That right there should be a lesson for ANY business that has a physical location and depends on the public at large for their business. If you aren’t selling an experience, you’re leaving money on the table and much of your marketing budget could be used much more effectively.

Here’s another example. We have a marine dealer that sells boats in Aloha (town outside Portland, OR) called Harvey’s Marine. It’s right outside Portland, about 20 miles to the west in the suburbs. Now, this marine store is about as far away from any recreational body of water of significance that you can possibly get in western Oregon. Plus, access to it isn’t really all that simple from the main arteries going through Portland, OR. I’m not exactly sure how long it’s been in business, but I remember it as a kid in 4th grade when I moved here from California and I’m 41 now. So, it’s been around for a while. 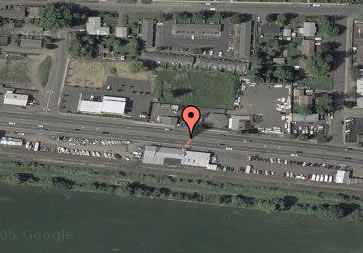 What’s the secret of their success? I don’t know about their business plan, but I do know they are a destination like none other. This is what you see when you drive by it, from the major thoroughfare that passes right in front of the store. Thanks to google satellite maps, you can even get a peek at the top of Harvey’s head from space.

The white spec at the end of the red line that I’ve drawn is his head. You can see it’s even taller than the roof of the building it’s next to and the building is very tall. (BTW: In case you are mistaking the solid green area below the building for water, it’s not. It’s a big green field of grass.)

I can’t know this for sure, but my guess is, if they hadn’t become an icon around here because of the big Harvey rabbit, they might not still be going strong after all these years.

Oh, they don’t just have a big rabbit. They also use it. Each year they dress it for the different holidays. It’s sometimes very hilarious but more to the point, it’s not a static fixture. It’s dynamic and always creating a remarkable image in the minds of the local populace. I can’t tell you the location of ANY other marine store and we’ve got plenty of them in the Portland metro area. But I could give you detailed directions to this store and I don’t even live near it any more. (I live about 45 minutes a way now on the other side of Portland.)

There was a guy in southern CA that had been in the news about a year ago because he couldn’t find a way to get rid of his penny collection. No one wanted that many pennies. Even banks were turning him down. He had an entire garage full of boxes packed with pennies. They were stacked to the ceiling. At the time, my collectibles company was being housed in a semi retail building where we had a manufacturing shop as well. But at the time, our manufacturing was being done somewhere else so I had some room to play with. I thought about calling the guy to offer to purchase his hoard of pennies for pennies on the dollar (pun intended) and as part of the deal, haul them away for him. Then just stack the pennies up in the shop area and rope it off and create a roadside attraction from it.

This would have been a great way to create a destination. When you send out a press release announcing your collectible manufacturing business, you get a ho hum response. If you put out a press release that highlights the fact that your collectibles shop has the largest stack of pennies on earth, on display in your showroom, you get a TON of press. Probably from all over the world, eventually.

If you own a furniture store, don’t just be a furniture store. Create something that can ONLY be seen at your store and will place the memory of your store above all other furniture store experiences. Create the tallest stack of chairs on earth. You could do this over time and set up a “chair stacking” cam on the internet. One by one, as you receive cheapo chairs (they could be the foldable type that cost you $7, whatever…) start welding them together or gluing them, or whatever is the safest method to attach them to one another and keep building it. Sooner or later, you will attract attention from far and wide and you’ll completely blow away your competition, even though they’re probably flushing $10K in radio advertising down the toilet each month compared to your relatively inexpensive and longer lasting method of gaining exposure.

The ideas are limitless. Just think of OVER THE TOP ideas. You can always scale them back as need be, but start with just the most incredible and wackiest idea you can come up with related somehow to what you sell or do and you WILL find something that will create remarkability related to your business.

It’s not WHAT you’re selling that matters. It’s the experience you create while selling it that will be the difference between you being just another XYZ store and something truly remarkable.

As the new tagline of my blog says, “If you ain’t remarkable, why?”

Dan Sherman’s plan to save TiVo

American Entrepreneur – Show the World Who You Are!